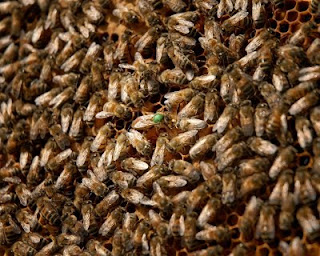 At Peace Bee Farm the queen bees wear a dot of color for identification. Whenever I have the opportunity to locate the queen bee in a hive, I catch her and mark her thorax with a color to represent the current year. This year’s bees wear green. Whenever I find a queen that I have previously marked, I can immediately tell her age by the color of paint. The queen bee is the only long-lived bee in the colony. The dot of paint, of course, helps to make the queen bee stand out among the thousands of bees in the hive. Even though the queen bee is somewhat larger than the worker bees that comprise the majority of the colony, she is often overlooked. The queen’s abdomen is longer than a worker’s, and it is more wasp-like in shape. Other than the shape of the abdomen the queen and workers look quite alike. She is often not recognizable, even when one is looking directly at her. If the queen is laying an egg, her abdomen is hidden in a cell. Because she emits strong pheromones, the queen may be covered by worker bees, hiding her from sight. Possibly the most important reason that we feel like it is worth the effort to locate, catch, and paint our queen bees it to tell if they have been replaced by supersedure. If we find a queen that is not marked as our records indicate, we can assume that the colony has replaced her. Following a painted queen over a period of months or years allows us to continuously evaluate her as a potential mother of new queens to be raised in the future.

Brandon Dill photographed one of this year’s queens marked in green. The paint helped make the queen stand out among the hoard of nurse bees and queen attendant bees. Brandon’s work can be seen at http://www.brandondillphotography.com/.
--Richard
Posted by Richard Underhill at 5:53 AM