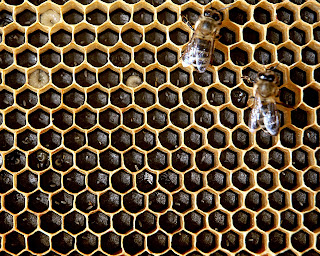 Accompanied by beekeeper and photographer Brandon Dill, I am checking the supers on some strong hives. Any hive with large population of bees and plenty of bees in the honey supers is considered normal. A large hive with few bees in the honey supers indicates a potentially collapsing colony. In those cases, we remove all of the honey supers and carefully examine the brood nest. Whenever we look into the brood nest, we are looking for evidence that we have a good, laying queen. The presence of eggs and young larvae indicates that there has been a queen in place in the past few days.

In the colony with the collapsing population of bees, we find eggs and larvae; but there is evidence that they are not the products of a good queen. Instead of the eggs being laid upright in the center of the cells, a number of eggs are laid on the sides of the cells. In a number of cells we find a number of eggs instead of a single egg. Click on Brandon’s photo to see cells with both a small c-shaped larva and extra eggs indicating multiple uses of the same cell over a number of days. Other cells show numbers of eggs laid in the same cell. This frame of brood appears to contain only non-fertile drone eggs and brood. There are two possible causes for drone laying. One is the presence of a worker bee with a fully developed reproductive system. The other potential cause is a queen bee that has depleted her supply of sperm and cannot fertilize eggs. In each case the colony is hopelessly doomed, as it cannot produce new workers or a new queen. A beekeeper must step in and take action or lose the colony. In each case the colony is unaware that it is collapsing because the laying worker and the sperm-depleted queen both secrete pheromones which stabilize the colony. See Brandon Dill’s powerful and imaginative work at: http://www.brandondillphotography.com/.
--Richard
Posted by Richard Underhill at 9:59 PM