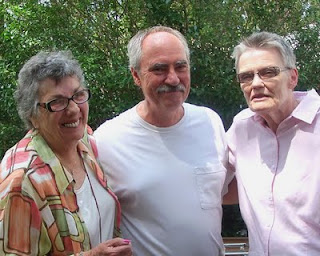 Honey bees have been declining in numbers for the past three years. This year’s loss is slightly less than the previous two year’s losses of nearly a third of the nation’s bees each year. Yes, it’s been three years since the honey bees were first reported as leaving their hives in what is called Colony Collapse Disorder; and we still don’t have a known cause. The solution of the mystery has proven difficult, as there are numerous complex factors affecting honey bee health. The good news is that Colony Collapse Disorder brought enough attention that bee health is now receiving some long needed scrutiny. In the first year of a four year study headed by the University of Georgia, researchers have established seven apiaries across the country to study the genetics of the Varroa mite, honey bee viruses, Nosema parasites, miticides, and the effects of farm pesticides. They are also trying to encourage local production of queen bees to counter the effect of a lack of honey bee genetic diversity. The Environmental Protection Agency and the USDA have narrowed the potential causes of honey bee disease to six: new and re-emerging pathogens, pesticides, habitat loss, pests that infest bee hives, commercial bee management practices, and nutritional stress. Imidacloprid, a systemic insecticide in widespread use, has been suspected by beekeepers as being a possible cause of Colony Collapse Disorder. Its manufacturers claimed it was safe for bees. It may now be independently tested.

While examining my bee yard at the Memphis Botanic Garden, I walked over to the farmers market and ran into Marge and Joann. They come out each week, buy our honey, shop for fresh produce, and visit. They always ask about the bees. Hopefully, we will be able to start reporting some progress resulting from the studies in bee health. The University of Tennessee has placed extensive honey bee health information on the USDA web site eXtension.org. Follow the path: Resource Areas-Farm-Bee Health.
--Richard
Posted by Richard Underhill at 10:45 PM