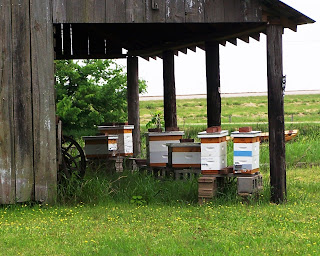 The young queen bees that were successfully mated in the queen mating yard are expanding their colonies. After the queens completed their mating flights, they continued to grow and develop for several days. After about a week, most of the queens had begun to lay eggs. Some started by laying several eggs in the same cell. Some wandered around the comb and placed an egg in a cell in a random pattern. Other queens started their egg laying by only laying infertile eggs which become drones. Most of the queens that had successfully mated with between 12 and 20 drones settled down to laying eggs in a continuous pattern within a couple more days. These queens were finally laying eggs across the frames in the brood nest in a large and continuous pattern. The queens will be held in the nucleus hives for several weeks. During this time, the brood pattern will be observed to help evaluate the effectiveness of the queen’s egg laying. A good queen may produce over 1500 eggs per day. If the queen does not lay a large number of eggs, she will not be able to grow the colony to overcome the losses caused by the worker bees’ relatively short life span of 42 days. Weak nucleus colonies will not be moved into full-size hives for production.

These queen bees were raised in nucleus hives, which are small hives. As the populations of these colonies rise, additional space must be made available. This is accomplished in these hives by adding a second story. The nucleus hives are scattered about the queen mating yard to assist the queens in finding their own hive when returning from mating flights. Here we see several nucleus hives that have been placed under a wing of an old barn. The two-story hives will soon be transferred to full-size hives.
--Richard

Posted by Richard Underhill at 11:14 PM