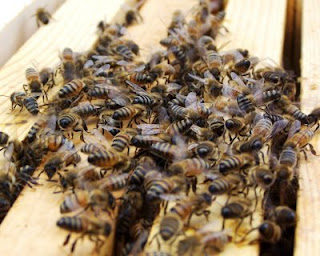 The queen bee is responsible for producing all of the eggs for the honey bee colony. Unlike organisms that mate again and again for the production of each offspring, the queen honey bee mates but once for a lifetime of egg laying. This occurs in a series of mating flights which typically occur over a day or two about five or six days after the queen’s emergence as an adult. During these flights, the queen bee will mate in the air with between twelve and twenty drone bees. She will store the sperm from these flights in an internal organ for the length of her life. This sperm will be used to produce fertile eggs to produce either workers or queen bees. She also lays non-fertile eggs to produce drones. By mating with a number of drones, the queen is assured of bringing genetic diversity to the colony’s offspring. Some of those diverse genes may be just the ones needed for the colony to survive in a changing environment.

I happened to be checking the queen mating nucleus hives on the day that a number of young queens were making mating flights. It appeared that the queen from this colony was outside the hive at the time I was checking it. I found no queen in the hive. The bees on every frame appeared to be fanning air with their wings across their raised abdomens. This is done to blow a plume of pheromones out through the air to guide bees to the hive. In this case all of the bees were involved in guiding their queen back home. Click on the photo and see the bees at the top of the hive’s frames posed to fan pheromones. While the bees look disturbed and disorganized, they were actually quite calm. The fanning by the bees shows the importance to the entire colony for the success of the mating flight. I feel like this is the most unique photo that I have taken inside a bee hive.
--Richard
Posted by Richard Underhill at 8:50 PM