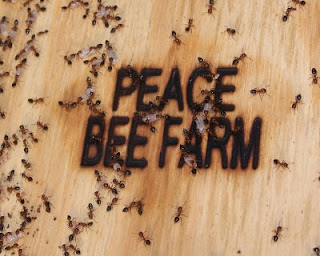 While examining a bee hive, I dropped a frame of bees and brood. Actually, I didn’t drop the frame; I really threw it back into the hive. A good beekeeper knows to always maintain a good grip on everything associated with a bee hive. Both embarrassed with myself and maddened, I looked to see why I did this. I saw that both of my hands were covered with stinging fire ants. These invasive fire ants are moving through the Arkansas Delta. I found the first two fire ant hills on Peace Farm three years ago. The following year, I found a dozen. By the next year there were hundreds of the over foot-tall ant hills. Now I am finding the fire ants living in our bee hives. The fire ants are establishing colonies between the outer and inner covers of the bee hives. In the photo, you can see the red and dark brown fire ants carrying their larvae past the half-inch tall letters left on our equipment by our branding iron. Two fire ants, social creatures, share the task of carrying one larva.

It is always difficult to control an invasive species. Plants or animals that are introduced into a new ecosystem often lack the creatures that helped regulate their populations in their original location. The fire ants may be replacing native ant species, which we try to protect and use as part of our integrated pest management program. There are insecticides available for use against fire ants. These may be effective; however, there is always the possibility of pests becoming resistant to chemical agents. Mechanical or biological control measures often prove to be better over time. There are few ways to mechanically control fire ants, which live deep in the soil. An educational partnership of universities in the United States, called eXtension, reports on a biological control being tested using a natural predator of the fire ant, the phorid fly. You can get more information about fire ants and see some of the research approaches being used at their web site, http://www.extension.org/fire+ants. I know that I will be doing some more research. Right now, the fire ants seem to have the upper hand.
--Richard

Posted by Richard Underhill at 1:32 AM