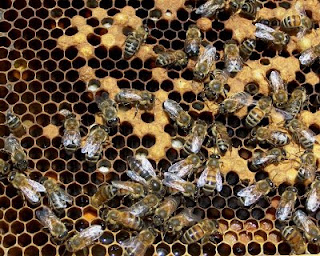 For a queen bee to be worthwhile to the colony, at least three things must have come into play: She must have come from good genetic stock; she must have received adequate nutrition throughout her development, and she must have been mated with a number of healthy drones. If a queen does not lay a large number of eggs, she will not be able to sustain the colony’s population. If the colony recognizes that the queen is weak, it will replace her in a procedure called supersedure. In supersedure, the colony raises a new queen which takes over the egg laying after killing the old queen. If the colony does not recognize that their queen is not laying enough eggs, the colony may weaken and die. Generally, queens that lay a large number of eggs each day produce large amounts of pheromones which provide the organization of the colony.

As we examine the nucleus hives containing the new queens, we are constantly looking for indications of the quality of the queens. In the picture we see a queen who looks large and healthy; however, her brood pattern is very poor. There is a random, spotty pattern of brood with drone cells surrounded by empty cells. The queen is the bee in the lower center with a wasp-like abdomen and a dark, shiny thorax. I suspect that this queen reached the point following its emergence as an adult at which it would normally make mating flights only to find the daily rains prohibiting flight. Queens which don’t make the mating flights lack sperm and cannot lay the fertile eggs necessary to produce workers or queens. They produce drones from infertile eggs. Drones alone cannot sustain a colony. This queen will have to be replaced.
--Richard
Posted by Richard Underhill at 9:48 PM