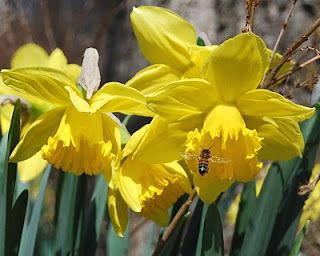 The end of winter and the beginning of spring find the honey bees eagerly searching for food for their expanding populations on any occasion that allows the bees to fly. The bees are in a period of population growth which demands considerable amounts of food; however, there are not yet ample amounts of food available from flowering plants. Adult bees can live on the high-energy carbohydrates in stored honey, but developing bees must have a complete diet. For good nutrition, the bees must have both honey and pollen. The pollen completes the honey bee diet by supplying protein, fats, vitamins, and minerals. The colonies are now consuming the last of their honey stores from last fall. Most of their pollen is being brought into the hive by foragers who seek out any flowers in bloom. The first warm days of spring bring foraging honey bees to plants that may not regularly attract bees. The bright yellow blooms of forsythia at times attract pollen foragers. Daffodils are early-blooming perennial flowers that do not often attract honey bees. However, this week I found large numbers of bees foraging for pollen in daffodils. These flowers marked the location of a long-abandoned home site in the margin of the woods. The bees would fly directly into the large bell of the flowers’ coronas and emerge with pollen.

While inspecting bees, I found the colony that held two queens on January 24 had died of starvation. I gave all of the colonies in that bee yard supplemental feeding at that time, and they consumed all of the syrup. It is likely that the colony with two queens laying eggs simply produced a population that could not be sustained by the available food. Beekeepers who want to produce a honey crop face a balancing act during the early spring. They must encourage the bees to build a large population to be able to exploit the large nectar flows while trying to avoid starvation and swarming.
--Richard
Posted by Richard Underhill at 1:11 PM