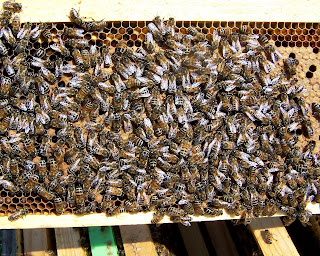 As a long winter comes to an end, opportunities arise for the beekeepers to open the hives for a closer inspection than has been possible so far this year. The frames can only be removed from the hive when the air temperature is warm enough to keep from chilling the brood. An inspection of a number of hives found the bees with strong, expanding colonies. Many of the colonies had consumed much of their honey stores. I feel that a number of the most populous colonies would have starved had it not been for late winter supplemental feedings.

Many of the hives were also ready for a rearrangement of the order of the brood boxes. It is the natural tendency of the honey bee cluster to move upward in the brood nest over winter. The bees eat the honey from the cells above their cluster, and then they move into the empty area and use it for brood production. In cases where the brood was found to be in the very upper-most part of the hive, the lowest hive body was usually found to be completely empty of brood and honey stores. Often the bees will not move downward by themselves; the beekeeper must step in to rearrange the hive to provide brood space. If the bees can’t find adequate numbers of empty cells for the queen to use to lay eggs, they colony will begin a month-long set of preparations for swarming. Moving the lowest hive body to the upper position effectively moves the cluster of bees downward in the hive. The empty cells above the brood nest can now be used for brood nest expansion or storage of nectar being brought into the hive. For some of the colonies, this week brought the second rearrangement of the brood nest this year. Each rearrangement opens brood space and stimulates brood production. Click on today’s picture of nurse bees tending brood of mixed ages, including eggs, larvae, and pupae.
--Richard
Posted by Richard Underhill at 11:01 PM