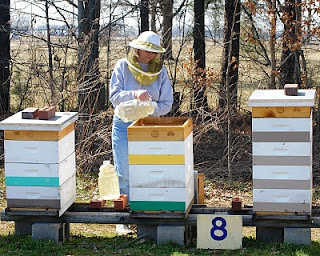 The majority of the winter honey bee colony losses are due to starvation. Hives that are low on stores of honey can be fed syrup as a survival measure. The bees are now in a critical period with populations growing and food consumption expanding. Warming weather allows the bees to leave the hive more frequently, and the increased activity consumes greater amounts of stored food. A few bee plants are starting to bloom, but there is not yet a great flow of nectar and pollen. Food in the form of syrup can be fed inside the bee hives at this time to help ensure survival. The syrup can be either sugar or high fructose corn syrup. We generally feed a thin syrup in the early spring rather than a more concentrated syrup like is fed in the fall. The thin syrup is similar to the carbohydrate in the nectar of flowers. The availability of this diluted syrup stimulates the worker bees to scout for food outside the hive. Early in the year the bees will travel great distances to find red maple, elm, skunk cabbage, henbit, dead nettle, and dandelion. Much of their early-season forage is found in river bottoms. Henbit, dead nettle, and dandelion are extremely valuable bee plants available in lawns that are not treated with herbicides.

Medications needed to control honey bee conditions, such as Nosema disease, can be applied in syrup fed in the late winter and early spring before supers are added to collect spring and summer honey. To ensure the medicated syrup is taken up rapidly by the bees, a feeding stimulant containing essential oils is added to the syrup. A new strain of Nosema has been identified as one of the possible contributing factors in Colony Collapse Disorder. Rita is feeding medicated sugar syrup flavored with essential oils of lemon grass, peppermint, tea tree, and wintergreen to a colony of bees that will be used to produce queens later in the spring.
--Richard
Posted by Richard Underhill at 1:21 PM