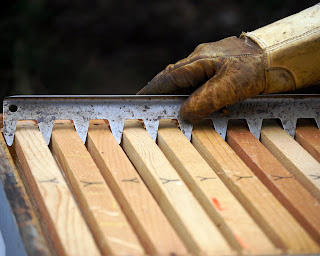 The modern bee hive is a functional replica of the honey bee’s natural home, a cavity in a hollow tree. The typical honey bee nest has brood comb in the lower portion of the cavity. Layers of pollen and honey surround the brood, like the layers of an onion. Each sheet of comb in the brood nest is trimmed to the same thickness. Surplus honey is stored in the upper part of the cavity, above the brood nest. Stored honey is held in cells which may be drawn out considerably longer than those in the brood nest. This makes for some sheets of honeycomb that are thicker than those below.

In the modern Langstroth bee hive, the surplus honey is stored above the brood nest in boxes called honey supers. They get the name, “super” from the fact that the boxes are “superimposed” or stacked upon one another. The beekeeper places frames of foundation in the supers for the bees to produce the honeycomb to hold the hive’s surplus honey. In keeping with the honey bee’s tendency to draw out more lengthy cells for honey storage, we often remove a frame to give the bees room to extend the comb. This allows each frame to hold more honey, and the beeswax cappings are exposed for greater ease of cutting the cappings and removing the honey at harvest time. The bees’ tendency is to build comb and store honey in the center of the hive. We can encourage the bees to use the entire honey super by placing frames of drawn comb in the outside positions and frames of foundation in the center. In the photo, I am spacing nine frames in a super capable of holding ten. Empty frames of honeycomb above the brood nest stimulate the bees to collect nectar and hoard honey. During strong nectar flows, the bees draw out the foundation in the center frames and fill it with honey. Additional supers are added as needed.
--Richard
Posted by Richard Underhill at 11:01 PM