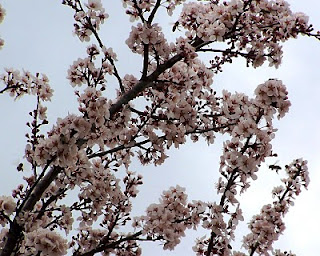 The plums are the first bright white-blooming trees to appear in the woods early in the spring. These members of the rose family grow in woodlands, fencerows, and old fields. The roses are important bee plants, providing ample amounts of nectar and pollen. There are numerous species of plums in the Mid-South including the wild plum and the Chickasaw plum, thought to have been cultivated by the Chickasaw Indians and early settlers. Many domestic plums have escaped into the woods, often forming thickets of white-blooming, low trees. Many of the domestic plums require bees to cross-pollinate the blossoms. The early bloom of the plums comes at an important time for honey bee colonies rapidly expanding their spring populations. After the bloom of the plums, a series of other fruiting trees in the rose family will come into bloom: pear, apple, cherry, peach, and crabapple. The almond tree, cultivated in California, is also a rose. All except the peach, which is usually self-fruitful, require pollination from bees to produce fruit. If you click on today’s photo, you can see honey bees actively foraging a plum tree. Some bees are collecting nectar, and others are collecting pollen.

A report has been released which indicates that Colony Collapse Disorder still persists after four years of honey bee die-offs in the United States and Canada. The report reveals that continuing CCD losses coupled with a more severe winter than normal may bring record over-winter colony losses this year. The study found bee pollen and hives laden with pesticides. Many of the pesticides are systemic agents which are designed to be taken up by the plants and carried throughout the plant. It is felt that the systemic pesticides are brought back to the hive by honey bees foraging for pollen to feed to the brood. The report can be followed at http://news.yahoo.com/s/ap/20100324/ap_on_sc/us_food_and_farm_disappearing_bees. Hopefully, this and similar reports will make more of the public aware of the effect certain pesticides have on the pollinators.
--Richard
Posted by Richard Underhill at 10:09 PM