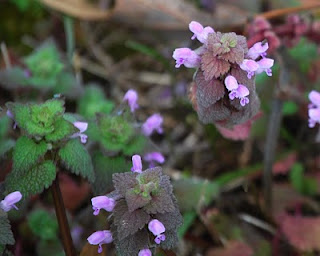 Lawns and open fields are covered with a low plant with pale purple flowers. This is dead nettle, a member of the important family of bee plants, the mints. Dead nettle is often found growing in the same fields with its close relative, henbit. Dead nettle has rows of pointed leafs; henbit has a rounded, curly leaf. Henbit has a similar flower with a darker purple color. They can easily be recognized as mints by their square stems. While many of the mints can be identified by distinct aromatic odors when their leaves are crushed, dead nettle merely smells of hay or rich forest soil. Dead nettle is a cool season plant that will disappear with hot weather. If lawns are not sprayed with herbicides, the dead nettles serve as a good source of nectar for honey bee colonies starting their spring build-up. If you click on today’s picture, you can see a tiny solitary bee foraging dead nettle.

I got a message today from an Arkansas beekeeper who discovered that she lost the queen for one of her colonies. It is fortunate that she has more than one colony to work with, because honey bees are not producing queens and drones in this region now. The colonies will be producing both in a few weeks, though. I found the first drone brood today that I have seen this year. Drones emerge as adults in 24 days, but they are not sexually-mature for about another 20 days. This beekeeper may need to combine her queen-less colony with a queen-right colony to protect the honeycomb until the bees are ready to produce queens and drones. If she lets the colony collapse from lack of a queen, hive scavengers will likely destroy the combs. Small Hive Beetles and wax moths eat the combs and contents of abandoned hives. Once the bees start producing queens and drones in a few weeks, she can divide her hive into two colonies.
--Richard
Posted by Richard Underhill at 10:09 PM