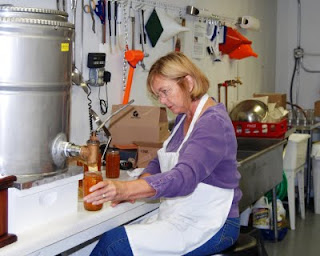 The honey bee is the only insect in the temperate region that remains active throughout the year. Most other insects either die in the winter or go into hibernation. The honey bee is able to maintain winter activity by producing and storing a high energy food, honey, to sustain the colony while flowering plants are not available. The honey bee stores its winter time food stores of honey in comb above the brood nest. The bees don’t measure the amount of honey that they have stored and compare it to their population while estimating the length of winter. They just go out and collect nectar whenever it is available. A strong colony will actually make a surplus of honey if plenty of flowers are blooming. It is the beekeeper’s task to take some of the surplus honey from the bee hive and place it into a useable container so that it can be enjoyed by humans.

When the honey bee completes its conversion of flower nectar into honey, it becomes a unique food that will virtually last forever. The honey is removed from the frames of comb in the honey supers by spinning the frames in the extractor. Honey pours out and is strained to remove flakes of beeswax from the comb as well as any foreign matter from the hive. The water content of the honey is measured to ensure that the bees have completed the evaporation of the honey. Next, the honey is placed in a bottling unit and allowed to settle. While debris settles to the bottom of most liquids, any foreign matter or bubbles in honey rise to the surface. In the photo, Rita pours a one pound jar of Arkansas Delta honey. At Peace Bee Farm all of our honey is the raw, unprocessed product of the hive. This honey is ready to be poured over a hot buttered biscuit.
--Richard
Posted by Richard Underhill at 9:49 PM