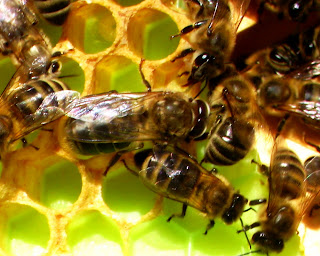 Honey bees build their nest from combs configured around six-sided cells of two sizes. The majority of the bee hive consists of sheets of comb with five cells per inch. This size cell is used by the honey bees to rear their brood and to store honey and pollen. The bees also build comb with cells that are slightly larger, measuring about four cells per inch. The larger cells are used for rearing drone brood; but if the colony does not need additional drones, worker bees will use the drone brood cells to store honey. Honey bees typically build their drone brood cells along the lower edge of worker brood frames and on burr comb, any comb that is not built in straight, parallel sheets. Honey bees readily draw-out drone brood cells on frames of drone brood foundation. These frames can be a useful part of an integrated pest management plan.

Desirable honey bee genes can be increased in the drone concentration areas by using drone brood frames. Freezing the drone brood frames is a good method of removing bees with bad traits from the gene pool. Also, freezing the drones from queen mother hives lessens inbreeding. Using drone brood frames has other benefits. With drone brood foundation available, the bees build less burr comb, resulting in fewer places for small hive beetles to hide. The drone brood frames provide a useful place to sample Varroa mites. The mites can be easily measured by removing a number of drone pupae from their capped cells. Excessive mite loads can be reduced by freezing the frames of drone brood. Replacing the frozen drone frames in the hives is a method of testing the hygienic behavior of the bees. The more hygienic bees will quickly remove the pupae killed in the freezer. At Peace Bee Farm, 10 percent of all brood frames are the green-colored drone foundation frames. The pictured bee with the large eyes is a drone; he is surrounded by workers. A drone larva is in the upper-left cell.
--Richard
Posted by Richard Underhill at 11:01 PM