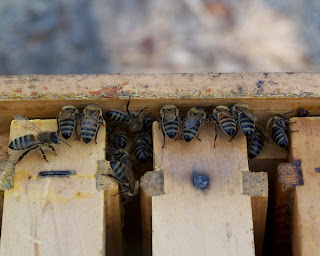 Beekeepers must balance the value of opening the bee hive and the damage that opening it causes. One of the decisions we make regarding the care of the bees involves how often we should open the hive and how much manipulation we should make to the bees’ home. In the presence of Small Hive Beetles, an Integrated Pest Management approach to beekeeping would likely involve minimal manipulation of the hive. The reason for this is that the honey bees have learned to defend the hive from the effects of the beetles by trapping the adult beetles and holding them in jails made of propolis or bee glue. The Small Hive Beetle is protected from the bees by a hard covering.

Click on today’s photo to see honey bees building Small Hive Beetle jails in a honey super. The workers are placing propolis along the ends of the frames to hold beetles as prisoners. In the picture a brown-colored adult beetle tries to escape. Its sensitive antennae are tipped with feather-like ends. To prevent breaking the propolis bonds that trap the Small Hive Beetles, we may make regular checks of the hives without opening them. Having large numbers of bees flying in and out of the hive and pollen being brought into the hive usually mean that we have a laying queen and bees are feeding larvae. Small Hive Beetles often hide in burr comb. We can remove hiding places by scraping beeswax from the top bars of frames. Using frames of drone comb foundation encourages the bees to not build burr comb. At times we can inspect a hive by removing a few frames from the upper hive body and look down into the lower box. We should not leave excessive amounts of equipment on the hive, as this provides good hiding places for Small Hive Beetles. We should also avoid hive feeder arrangements that drown bees; Small Hive Beetle larvae thrive on the protein of the dead bees.
--Richard
Posted by Richard Underhill at 10:06 PM