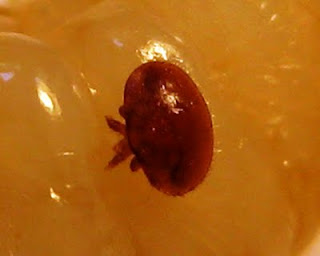 The Varroa mite is the greatest killer of honey bees. These pin-head sized mites attach to the developing brood and adult bees and suck their blood, which is called hemolymph. Of course, the blood sucking by these parasitic mites weakens the bees. The mites also vector in a number of honey bee diseases as well. At least 15 honey bee viruses have been identified in the bees in the United States. One of the viruses associated with Varroa mites is Deformed Wing Virus. When a beekeeper finds bees with short, curled wings as well as weak, crawling bees, it is a sign of Parasitic Mite Syndrome, a Varroa-vectored virus. Colonies in this condition are often leading to a rapid collapse.

Researchers are attempting to develop methods of reducing Varroa mites without the use of chemical miticides. The continuous use of pesticides, like the insecticides and miticides, often lead to chemical-resistant strains of the pests being treated. Researchers with the USDA’s Agricultural Research Service are developing a scent which attracts the Varroa mites and leads them to a sticky trap. See www.ars.usda.gov/is/ar/archive/jul09. The use of the scent is a biological control, and the use of the sticky trap is a mechanical control. Both biological and mechanical controls are favorable approaches to reducing mites, as they do not lead to the evolution of resistant strains of Varroa. This occurred with the use of Fluvalinate and Coumaphos miticides over only a few years since the introduction of parasitic mites into the United States in the late 1980s. Click on today’s picture to see a close-up view of a Varroa mite, which has penetrated the surface of a honey bee drone pupa with its mouth parts. The puncture wound on the pupa is a good point of entry for viruses. Shirley Murphy took this photo of the mite we found while examining drone brood foundation. Varroa prefer to reproduce in drone brood, which has the longest development time.
--Richard
Posted by Richard Underhill at 8:35 PM