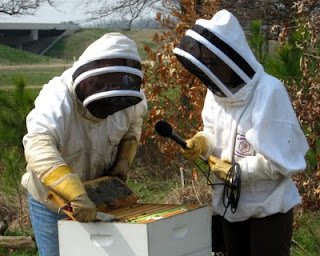 Honey bees and humans are social creatures. We both live in proximity with others and share in daily activities. The benefit of sociality is that the colony of bees or the community of people can accomplish more as a group than the individuals could if acting alone. An important element in our social arrangement is our ability to communicate with others and to direct members to the location of remote places. For the honey bees, this often means distant blooming flowers. Both bees and humans also need to be able to find their home from miles away. The honey bees primarily communicate among themselves by means of odors. They detect odors, known as pheromones, from the glands of other honey bees. Bees fan air across their raised abdomens to direct flying bees to the hive or to a swarm. Other honey bee communication is accomplished by sight and by vibrations in the hive. By far, one of the most complex forms of communication observed in nature is the honey bee’s dance. By dancing, the honey bee conveys to other members of the colony the direction and distance to a distant food source. This is, by the way, the same information that we give to airplane pilots for navigation: direction and distance.

Humans communicate by voice, by vision, by written words and symbols, and now largely by electronic devices. Rita and I received an invitation from Candice Ludlow, News Director for WKNO FM Radio, NPR for the Mid-South, to visit their new digital media center. I headed out with a map that I downloaded from the internet. It gave me the direction and distance. I got turned around in route. At times I checked the direction against the sun. Bees do that. At other times, I checked it against the compass in my car. Bees can navigate by magnetism. We’ll see Candice another day. Here’s a picture of Candice interviewing me for an NPR report on Colony Collapse Disorder.
--Richard
Posted by Richard Underhill at 10:16 PM