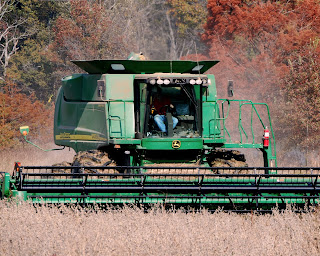 Soybeans are a major agricultural crop in the Arkansas Delta. Soybeans are an important source of protein and oil. Soybean protein is used as animal food for livestock and poultry. Soybean oil is used in food production as well as paints, plastics, inks, clothing, and biodiesel fuel. The soybean seeds that were drilled into the undisturbed stubble of harvested winter wheat produced a second crop on the same land this year in an example of double crop production and no-till farming. While the wheat, a grass, tends to deplete the soil of nitrogen, the soybean, a legume, acts to replace the nitrogen in the soil. The use of no-till farming practices reduces the losses of soil moisture caused by plowing, reduces fuel use, and lessens weed sprouting in disturbed ground. Weeds are largely controlled in soybean fields by the use of chemical herbicides. Mechanical field cultivation for weed control is rarely seen today.

The soybean, considered self-fertile, can be a significant source of nectar for honey production. However, there are quite a few varieties of soybeans being grown now; and some varieties produce enough nectar for honey bees to produce a surplus of honey, and some do not. The result for the beekeeper is that soybean may be an erratic nectar source, changing from year to year depending upon the varieties of soybeans grown in the area surrounding the bee yard. The variety of nectar rewards offered to the honey bee may explain the difference in results of studies of increases in soybean crop yield for soybeans pollinated by honey bees. Results have been measured from zero to 30 percent increases in soybean yield when honey bees are present for added pollination. A 16 percent increase is the most common finding. Soybean farmers and beekeepers both recognize the importance of the honey bee in helping to produce our food crops. Soybean honey, one of my favorites, is light amber in color and mild in aroma and flavor.
--Richard
Posted by Richard Underhill at 10:39 PM