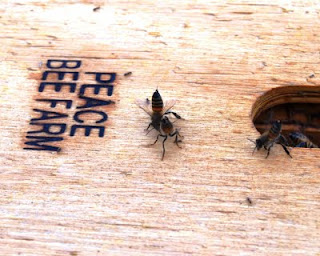 Since honey bees are social insects living in large colonies, communication among the individual bees is important. Honey bees communicate by detecting vibrations, tastes, and odors with their acute senses. The use of chemical odors seems to be the honey bees’ greatest means of communications. Odors that are secreted by glands and sensed by members of the same species are called pheromones. There are two times when you can find bees standing with their abdomens raised and fanning their wings. One time is when the bees are fanning across glands located in the abdomen to release pheromones to guide bees to the hive. The other time that bees fan their wings across their raised tails is when they are alarmed. Alarmed guard bees can be found on the inner covers of hives when the outer covers are removed. In cool weather, like we are currently experiencing, the hive covers often open with a loud pop, as the propolis bee glue on them is brittle. The bees in the hive detect the vibration through sensors in their legs and are alerted. Alerted bees differ in appearance from bees fanning to guide bees to the hive in that alerted bees extend the sting.

Click on today’s photo to see guard worker bees posed on the inner cover of a bee hive with their abdomens in the air and their stings exposed. With the sting exposed, the bees fan air across a small drip of alarm pheromone. Other bees in the hive detect the pheromone odor and immediately prepare to defend the hive. When the beekeeper sees the guard bees with their stings exposed, he or she should be aware that the colony is unsettled and defensive. Usually, the bees can be calmed with a little smoke, which interferes with the detection of the alarm pheromone. At other times it is advisable to close the hive and wait till another day to open the bee hive.
--Richard
Posted by Richard Underhill at 9:13 PM