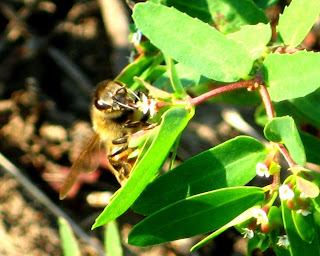 As we move into the middle of November, blooming flowers are becoming more and more scarce. I found some trailing lespedeza in bloom being foraged by honey bees. Lespedeza is a member of the important bee plant family, the legumes, Leguminosae or Fabaceae. The legumes, also known as the pea or bean family, include a large number of species of herbs, shrubs, and trees that produce nectar and pollen that is collected by honey bees and other pollinators. Among the legumes there are several species of wild indigo as well as false indigo, partridge peas, wild senna, butterfly pea, vetch, tick trefoil, or beggar’s lice, coral bean, everlasting pea, American wisteria, and kudzu vine. Lespedeza includes a number of species of bush clovers that are important wildlife foods. Other legumes include crimson clover, red clover, and white clover, probably the world’s greatest nectar source for honey. Trees in the legume family include mimosa, Kentucky coffeetree, the locusts, and redbud. Food and forage plants in the legume family include soybeans, peanuts, lespedeza, lentil, alfalfa, and cultivated peas and beans.

Aside from the food and forage value of the legumes, we derive dyes, gums, resins, and oils from the seeds. The legumes are a major food source for wildlife. Legumes also serve the environment by fixing nitrogen into the soil. Many of the legumes house bacteria living in nodules on the plant roots which convert atmospheric nitrogen to a usable state in the soil. In the Arkansas Delta, soybeans are the greatest nectar source for honey due to the immense acreage of plantings. Our Peace Bee Farm summertime honey is principally derived from a mixture of nectars from soybeans and wildflowers. This honey has a light amber color and a mild aroma and flavor. The legumes are truly important plants for the honey bees. With the help of the honey bee’s pollination, the legumes provide large amounts of food and forage for man, and domestic animals, and wildlife.
--Richard
Posted by Richard Underhill at 9:00 AM