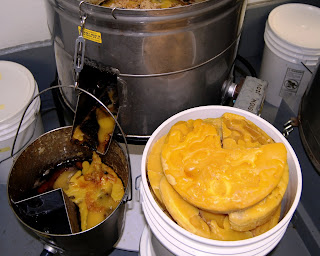 Beeswax is an important product of the bee hive. Considered to be man’s first plastic, beeswax has been used for many purposes for thousands of years. Beeswax was used 16 thousand years ago in Paleolithic paintings found in Lascaux cave in southwestern France. The Egyptians used beeswax in shipbuilding and preparing mummies. The Romans used beeswax as a waterproofing material for painted walls, and both the ancient Romans and the Greeks used beeswax to produce metal objects in a process known as lost wax molding. The process, which begins with a beeswax model being coated with plaster, is still used today. After the plaster hardens, the beeswax is melted out and the empty space in the plaster is filled with molten metal. The result is a metal copy of the beeswax model. The English longbow was made of wood which was protected by a coating of beeswax. Archers today strengthen their bowstrings with beeswax. Sewing threads are strengthened the same way. Beeswax was used for hundreds of years to lubricate and seal cap and ball firearms. Along with many home and industrial uses, beeswax has long been used for making candles and cosmetics. Artists color cloth using beeswax in a technique known as batik and use beeswax in encaustic painting.

For beekeepers, one of the most important uses of beeswax is the manufacture of foundation for the bee hive. The foundation is the mid rib of the honey comb which is made of beeswax secreted by the two to three week old worker bees. When beekeepers purchase beeswax foundation, it contains traces of chemicals, mostly pesticides used to fight parasitic mites. At Peace Bee Farm, we save our own chemical-free beeswax cappings from the honey harvest to paint onto our plastic foundation as part of our integrated pest management program. Removing old comb and allowing the bees to replace it with freshly secreted beeswax removes chemicals and spores of honey bee diseases, such as American foulbrood, chalkbrood, and Nosema.
--Richard
Posted by Richard Underhill at 10:41 PM