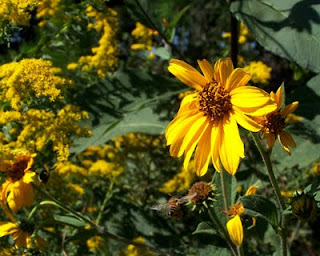 The great observer of the natural world, Charles Darwin, spent a lifetime making observations and meticulously recording his notes. Much of his observations involved honey bees. One of the observations that he recorded is the bee behavior known as flower constancy. Individual honey bees will continue to forage on the same species of plant as a source of nectar or pollen as long as the plant produces a reward to the bee. A honey bee will move from flower to flower of the same species even though there may be other plants in bloom. Other bees from the same hive may forage other species of plants. Continuing to work the same species of plant makes the honey bee the most effective and efficient pollinator for agricultural crops. Click on today’s photo. A foraging honey bee moves from one perennial sunflower to another, exhibiting flower constancy. On the left side of the photo, we see a carpenter bee that has just left the sunflower in the center flying to nearby goldenrod flowers in the background. Many solitary native pollinators, like the carpenter bee, do not exhibit flower constancy.

At a given time, one hive may have nectar and pollen being brought in from numerous flowering plant species. In their foraging habits, individual honey bees do not collect both nectar and pollen. Certain bees from a colony will collect nectar and other bees from that colony will collect pollen, even if it is from the same plant. A bee that is collecting pollen will continue to collect pollen throughout the day. When beekeepers trap pollen that the bees are bringing into the hive, we can see that each colony has its own pattern of collecting pollen. On the same day, the bees in one hive may bring in green, brown, and black colored pollen while the bees in an adjacent hive will be bringing in yellow and orange colored pollen. Charles Darwin’s complete works are available online at: http://darwin-online.org.uk/
--Richard
Posted by Richard Underhill at 9:15 PM