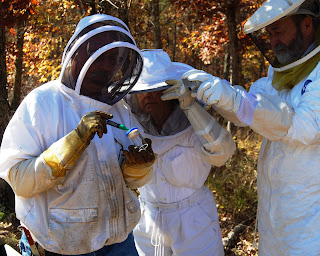 Being social insects, honey bees share in the duties of the hive. Each individual does not perform all of the daily tasks of the hive. The workers assume different roles and perform the needed colony tasks. The worker bees’ roles change as they age. As these bees age, their various glands develop; and they change in their ability to produce brood food, secrete beeswax, produce an effective sting, and perform various tasks. For this reason, the workers pass through a series of tasks throughout their life. Among the shared tasks performed by the bees are cleaning of the nest, feeding the brood, feeding and tending to the queen, guarding the hive, secreting beeswax, building honey comb, cooling the hive, moving honey and pollen about the hive, foraging for nectar and pollen, and curing honey.

While the honey bee colony shares in collecting, preparing, and storing food, tending to the hive, and feeding and caring for the brood, the colony also employs a common means of reproduction. A single queen bee produces all of the eggs that will become the population of the colony. The male bees, the drones, serve a single role. The drones mate with queen bees. Since the drones never mate with queens inside the hive, they add genetic diversity to surrounding colonies. The queen bee is more likely to be mating with drones from various distant colonies. Since the population of the colony and its success is dependent upon one bee, the queen, she is of utmost importance to the colony. Many beekeepers mark their queens to be able to match the colony’s traits to an individual queen. Honey bee colonies regularly replace their queens through a process called supersedure. If a queen bee is found in the hive without the appropriate marking, it is likely that the queen has been superseded. In the photo, Shirley, Mike, and I are marking a queen bee with a dot of paint on the bees’ thorax.
--Richard
Posted by Richard Underhill at 9:31 PM