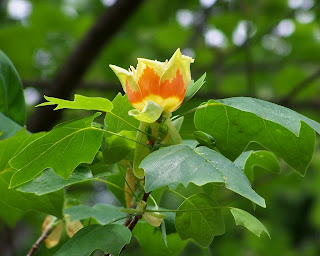 The tuliptree, also known as tulip poplar or yellow poplar, is in bloom. Tuliptree has a straight trunk and distinctive leaves with four points that resemble the shape of a crown. This large and beautiful tree is a heavy producer of nectar from which honey bees produce a dark colored, robust flavored honey. While not many tuliptrees can be found in the Arkansas delta, a number of them exist on the other side of the Mississippi River. Tuliptrees can be found in the woods and in older neighborhoods like this tree from one of Memphis’ hundred-year-old neighborhoods.

As well as producing nectar for honey bees, tuliptrees are known for producing considerable amounts of honeydew at times. If you click on the photo, you can see that the upper side of some of the leaves appears wet and sticky. This is honeydew, a sugary secretion from chewing insects, like aphids. Honeydew is a sticky substance that is often found covering the surface of cars parked near trees. Honey bees will bring honeydew into the hive and convert it to honey.
--Richard

Posted by Richard Underhill at 3:52 AM