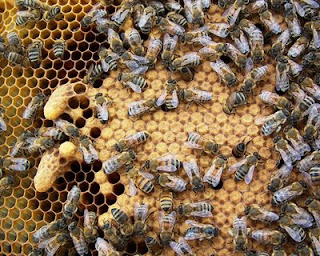 Honey bees are social insects. Each honey bee colony has a single queen bee. She is of utmost importance to the colony, as she lays all of the colony’s eggs. The loss of the queen can lead to the loss of the entire colony. To be prepared to replace her if necessary, the colony regularly produces new queens. If the new queens are not needed, the colony kills them. In the photo we can see two queen cells that the colony has produced. They are the elongated structures on the left side of the picture. Queen cells hang down vertically from the combs, while worker and drone cells are aligned horizontally. The photo actually shows all three types of cells. There is a drone cell, shaped like a bullet, on the edge of the lower queen cell. The remaining capped cells all contain developing worker bees.

In the photo we can also see workers with their heads in empty cells in the brood pattern. These bees are cleaning out the cells which were opened to remove bees developing with parasitic mites. Removing the mites in this manner is a genetic trait, called hygienic behavior, which beekeepers try to pass along to other colonies. They do this by grafting larvae from this colony’s queen or moving one of these queen cells to another hive. This is a healthy colony of honey bees.
--Richard

Posted by Richard Underhill at 4:16 AM