This is Swarm Season 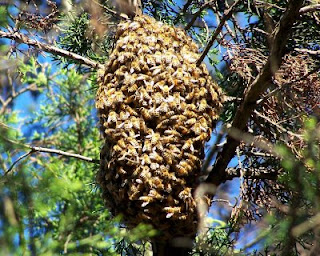 Swarming is the honey bee's method of propagating its colonies. The queen lays eggs to rapidly expand the population of the colony in the spring of the year. This often leads to crowding in the brood area of the bee hive. Nectar from spring flowers is often stored in the brood area, also adding to a reduction in the number of cells available for the queen to use to lay eggs. The crowding and reduction in the capacity for the queen to lay eggs start the bees to making preparations for swarming. The actual swarming event often occurs after the bees have been confined in the hive for several days due to rainy weather. Once the sun breaks out, the bees are ready to break out as well. They fly out in a large, circling swarm; then they usually converge on a nearby tree or structure. Following three days of rain this week, I received calls about several swarms in trees and shrubs and on house porch columns and bird baths. This swarm was located high above the ground in a red cedar tree. The swarm had flown from its home in a cavity in a large, nearby oak tree. I was able to cause the bees to fall into a waiting cardboard box by giving the branch that they were holding onto a quick shake with a long pole. This swarm will become the start of a new colony in one of our bee yards.

For the beekeeper with managed hives, swarm season is a challenge. Hives must be encouraged to build up large populations in order to make a surplus of honey to be harvested and to efficiently pollinate crops. Too much encouragement often results in swarming and no honey to harvest for the year’s efforts.
--Richard
Posted by Richard Underhill at 10:51 PM