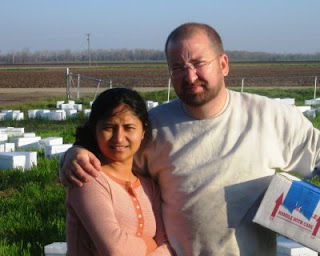 I ran into Kevin and Pratima Jester of Jester Bee Company this morning. They had just unloaded four hundred nucleus colonies of honey bees at their headquarters in West Ridge, Arkansas. They drove non-stop through the night from their Florida operation where they had raised these bees. The nucleus colonies will be used by beekeepers in the Mid-South, Mid-West, and New England to establish bee hives. The Jesters raise the bees in the Deep South to get the populations of bees established earlier than is possible in cooler areas.

The Jesters are remarkably imaginative and industrious beekeepers. Like many beekeepers, they lost a large portion of their bees in 2007 to the condition known as Colony Collapse Disorder. While the cause of this condition is not yet known, the Jesters have been working to keep healthy bees and to regrow their business. They have developed some products to help beekeepers meet the honey bees’ nutritional needs. The Jesters are like a number of beekeepers who are experimenting with methods to keep the honey bees healthy. Beekeepers will want to save the address: jesterbee.com.
--Richard
Posted by Richard Underhill at 11:18 PM