Hiving a Swarm of Bees 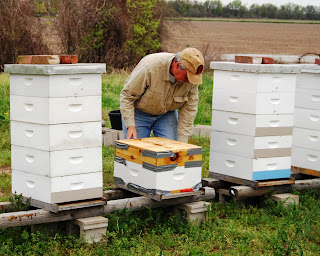 Swarming is the honey bee’s method of reproducing on a colony-wide basis. In the spring of the year, honey bee swarms are fairly numerous. In areas where Africanized Honey Bees are not present, capturing these swarms is a way for beekeepers to replace colonies lost to winter die-offs or to expand their operations. There are numerous ways to hive bees from captured swarms. The bees can be captured in a cardboard box and then transferred into a prepared hive. In this case, I was able to hold a hive into position below a swarm of bees clustered on the side of a large tree and brush the bees gently into the hive. The hive was held closed for the trip to the bee yard by duct tape. The swarm should organize itself as a colony in the new home in the bee hive. Worker bees will begin drawing out honey comb and the queen will lay eggs in the cells. After I have this hive set up, I will feed the bees sugar syrup and then leave them alone for a week. The swarm is being held in a single hive box. As the colony increases in population, more boxes will be added to the hive. A swarm of bees captured in the early spring can possibly grow to the size necessary to produce some surplus honey for the beekeeper by late summer. Honey bees are wild creatures, and a swarm is a gift from nature.
--Richard
Posted by Richard Underhill at 11:16 PM