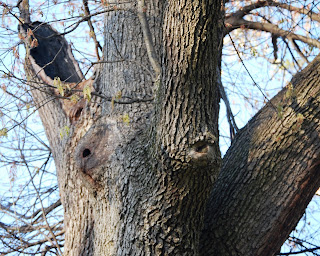 Memphis is a unique city. Flying over the city, we get the impression that we are over a park instead of a typical large city. The majority of the city is covered with massive oak trees. This week I got a call about a swarm of bees in a shrub in the lawn of one of the city’s one-hundred-year-old neighborhoods. The homeowner explained that this was actually the second swarm to appear in the shrub in the same week. When I arrived at her home a short time later, these bees, like the earlier swarm, had already flown away. This is the typical pattern of swarming honey bees to light on a shrub or structure close to their old cavity home. After a short period of time they move on to a permanent home in another cavity.
In Memphis, the bees have no problem finding a suitable cavity for a new home. Many of the large oak trees have cavities resulting from lightning strikes or storm damage over the years. I found just such a tree nearby. About thirty feet above, bees could be seen entering and leaving the huge oak tree through a hole in the trunk. Often we have colonies of honey bees in our own yard, sometimes for years, without our even knowing it. We share a rich natural environment with people, trees, flowers, and bees. It’s a good thing to have cities that look like parks.
--Richard
Posted by Richard Underhill at 10:07 PM