In the Honey House 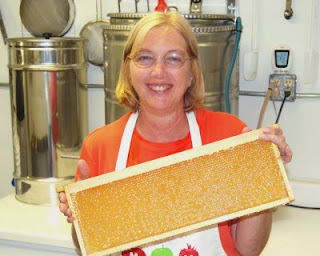 Whenever flowering plants are in bloom, the honey bees gather nectar and convert it into honey. They place the honey close to the brood, so that it may be conveniently mixed with pollen to make bee bread to feed to the larvae. If there is a significant nectar flow, the bees can store a surplus of honey. The surplus honey is stored in the frames in the upper portion of the bee hive. These frames are contained in boxes called supers. The supers are separated from the hive’s brood nest by a queen excluder, which is a sheet of plastic or metal with holes that are too small for a queen or drone to pass through. Worker bees, being slightly smaller, can pass through the queen excluder and enter the honey supers. In the supers, the workers draw out cells of beeswax, fill them with nectar, and mix the nectar with enzymes that they produce to chemically change the flower sugars to honey. Next, the worker bees fan the honey with their wings to evaporate the excess moisture. Once the honey is concentrated to 18 percent water content, the bees cap the cells with beeswax. This fully ripened honey is 82 percent sugar, and at such a concentration the honey will last indefinitely.

In the honey house, the beekeeper’s task is to remove the beeswax cappings to expose the honey. The honey can then be removed from the frames by spinning the frames in a machine called an extractor. This releases the honey which only needs straining to remove particles of beeswax from the uncapping procedure. There are numerous ways for beekeepers to handle the honey. At Peace Bee Farm, we prefer to uncap the frames with a sharp, cold knife. Rita is holding a frame of honey with the cappings removed, the frame ready for extraction. After the honey is removed, the frame is available for reuse in the bee hives. The frames can be returned to the bees this year, or they may be stored for use next spring.
--Richard
Posted by Richard Underhill at 10:03 PM