From Bird House to Bee Hive 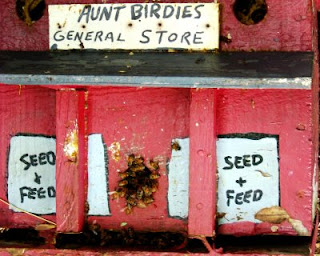 Honey bees expand their territory and numbers of colonies by dividing the hive and swarming. This colony-wide method of reproduction typically occurs in the spring, but some swarming is done in the summer and fall. When the swarming bees leave their old hive, they take their old queen along with them. They leave behind a new queen or capped queen cell, which is ready to emerge as a queen. The swarm flies around then stops for a while, searching for a cavity to use as a permanent nest. The cavity is often an object that was not intended for housing honey bees. In the photo you may see honey bees that occupied a large, decorative bird house in a suburban garden. After the bees filled the cavity with comb and honey, the weight caused the bird house to fall to the ground. At the request of the homeowner, I removed the bird house and the bees.

I carried the bird house to a distant bee yard where I take swarms with their unknown genetics. I placed the bird house on a screened hive bottom and enclosed it in two medium-depth hive bodies. Above the bird house, I placed another hive body filled with drawn comb. In the center of this upper box, I placed a frame of open brood, borrowed from another colony. Nurse bees were attracted to the pheromones of the open brood, and they moved up immediately. Over time, more and more bees moved up into the frames of comb. It is a natural tendency for honey bees to move their brood nest upward. Once the queen moved into the upper box, I was able to hold her there by placing a queen excluder under this box. After a brood cycle of 21 days, all of the honey bee eggs laid in the bird house had emerged as adults. I was then able to remove the bird house and the empty lower hive body boxes. This transition from a bird house to a modern Langstroth bee hive was successful. It is now a productive hive. Much of the enjoyment of beekeeping comes from the challenges of continually solving situations such as this colony transfer.
--Richard
Posted by Richard Underhill at 9:54 PM