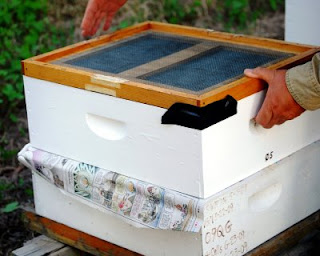 Honey bees have remarkable mouth parts. Since their natural home is a hollow tree, they have the ability to shape wood with their mandibles. When a swarm of honey bees moves into a cavity in a hollow tree, the worker bees clean up the inside of the tree. They chew away any loose particles of wood. Beekeepers can take advantage of this wood chewing ability in a technique for combining two colonies of bees into one hive. If the beekeeper simply combines two colonies, the bees are likely to fight. The result is the death of many bees. The fighting can be avoided, and the bees can be united to become a single colony occupying the hive by separating the two original colonies with a sheet of newspaper. As newspaper is made of particles of wood, the bees can chew through the paper over a period of several days. While the bees are chewing the paper, they begin to get accustomed to the odor of the other colony. By the time that the paper is perforated, the colony odors are blended into one.

In the photo, you can see where I am combining a colony having a young, laying queen with a colony which has lost its queen. The queen-less colony is under the newspaper; the queen-right colony is on the top. While moving the strong queen-right colony, I used a double screen board as a temporary cover to provide plenty of ventilation for the bees. This screen arrangement at the top will be replaced with normal covers. Care must be taken to ensure that all of the bees have adequate ventilation until they have had time to chew through the newspaper. Here at Peace Bee Farm, this method of re-queening colonies is almost always successful.
--Richard
Posted by Richard Underhill at 7:42 AM