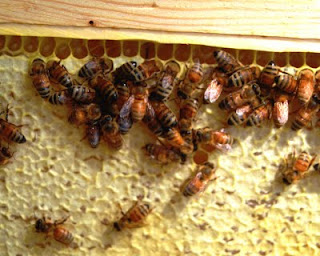 As Shirley Murphy and I examined her new hive of bees, we looked over the various patterns of hive structures, all based upon the honey bee’s six-sided cells of beeswax. Each structure in the hive has a slightly different appearance. The brood area has open cells that are empty or that have eggs or larvae. There are capped cells in the brood area with a brown, slightly gritty texture. There are capped drone brood cells shaped like the nose of bullets. These rise above the surface of worker brood cells. There are free-form shapes called brace comb and burr comb that don’t lie in flat sheets. Vertical queen cell cups and queen cells hang from the bottoms of frames. In the honey supers, the bees make frames of comb to hold the liquid honey. Wet, uncured honey is held in open cells. Cured honey, which is chemically altered by the enzymes in the honey bee’s body and then evaporated, is capped with beeswax. The freshly secreted capping wax ranges in color from white to yellow. The surface of the beeswax cappings contains curved linear markings, giving the appearance of hieroglyphic writings.

Shirley noticed that all of the bees along the top edge of a frame of capped honey had their heads inside cells. These bees were curing the remaining cells of honey. The bees suck the honey into their honey gut, mixing it with enzymes. They then blow bubbles with the honey, expanding its surface area and promoting evaporation. Evaporation is increased by the bees’ fanning their wings. They cap the honey with freshly secreted beeswax once its moisture content is reduced to 18 percent water. In the picture you can see the bees actively involved in curing the honey. The yellow, textured structure is cured honey capped with beeswax and patterned like hieroglyphics.
--Richard
Posted by Richard Underhill at 10:03 AM