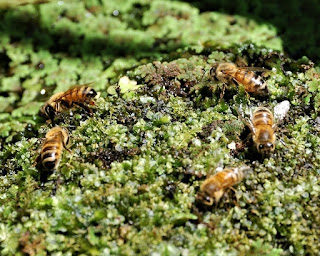 The hot, droughty mid-summer period is often called the Dog Days of Summer, and a significant dearth of nectar often exists from July through September. At this time, locations that produce spring honey see a dramatic reduction in honey production. Bee hives located near agricultural crops continue to produce honey, especially if the crops are irrigated. Summer’s dearth is a time for harvesting spring and summer honey before fall wildflowers come into bloom. Typically, honey produced from flowers early in the year are mild in flavor and aroma, while honey produced in the fall is          quite more pronounced. Honey bees do not bring into the hives as much nectar and pollen during the summer’s dearth, however, they forage a considerable amount of water. In today’s photo, honey bees are foraging water from moss-covered rocks and duckweed in the bee yard’s water source. A short high speed video shows how the honey bee uses its tongue to take in water either by lapping or by sucking: https://www.nytimes.com/2020/08/11/science/honeybees-drink-video.html. Beekeepers should make sure that their hives have a reliable source of water throughout the year, and this is especially important in the heat of summer when bees use water to help cool their hives.

The Dog Days of Summer are a good time to take care of other bee hive issues. Small hive beetle populations often expand during the heat of summer. If unchecked, the beetles can overwhelm bee colonies. Integrated pest management approaches to beetle control include hive placement in the sun, beetle trapping, and minimal hive manipulations. Beekeepers should try to prevent multiple generations of beetles from existing in the hives before wintertime. Late summer is a good time to provide pollen substitute feeding to stimulate the queens to continue to lay eggs. It’s important that beekeepers plan for controlling varroa mites as soon as the honey is harvested and temperatures cool to within treatment limits. Consult the Honey Bee Health Coalition’s Varroa Management Decision Tool: https://honeybeehealthcoalition.org/varroa/.
--Richard
Posted by Richard Underhill at 6:47 PM