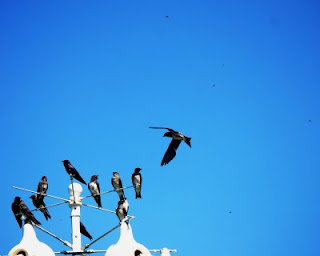 At Peace Bee Farm, we enjoy the purple martins for half of the year. These largest of the swallows arrive in February, nest in artificial gourds that we provide for them, rear young birds, and then leave without fanfare in July. During the six months that they occupy the farm, they entertain us daily with their song, which is almost speech, and their flight, which some describe as aerial acrobatics. Anyone who has observed these popular birds knows their ability to climb, dive, and soar can’t be matched by other birds. They can regularly be seen sweeping along the surface of lakes or soaring hundreds of feet in the air, catching insects in flight. When they approach their nest, they dive at great speed. It is not uncommon for us to see drone honey bees chasing the martins as the birds circle their nesting gourds or sweep in for a landing. Sometimes a single drone follows a martin; at times half a dozen drones will be in close pursuit. The drones, which normally pursue queen bees in their mating flights, have no trouble keeping up with the rapid, turning flight of the martins. Click on the photo and you can see a number of drones that followed the martin all the way back to the perch above their nesting gourds.

The purple martin is an insect eater and a very efficient gatherer of flying insects. It is obvious that our martins frequent the drone concentration areas and bring back drones visually focused on the zooming birds. I don’t know how many drones and queen bees are eaten by these birds along the way, but I do feel that the birds are doing their part to eliminate weak drones and queens from the mating areas. If this is the case, the martins are helping select for stronger honey bees. The martins will spend the next six months in the Amazon River basin. I wonder if their other home is a similar bee farm in the Southern Hemisphere.
--Richard
Posted by Richard Underhill at 3:21 PM