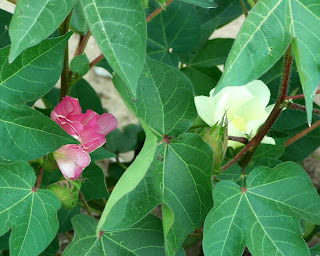 Cotton is in bloom in Arkansas’ Mississippi River Delta. Cotton and soybeans are the two most important nectar producing plants in the region. Both crops are planted in broad expanses throughout the Delta. Cotton is a member of the mallow family, which includes the hibiscus and swamp mallows. Cotton is a good example of a plant which contains both floral and extra-floral nectaries. The nectaries are the part of the plant which secrete nectar. Cotton produces nectar inside the pale yellow flowers on the first day of the bloom. By the second day, the flowers change color, becoming dark pink. At this time, the nectar stops flowing inside the bloom; and honey bees stop visiting the flowers. Cotton also contains nectaries on the green bracts at the base of the flower. A third nectary exists along the underside of the leaves. All three nectaries produce large amounts of nectar to attract the honey bee.

Cotton honey is light in color and flavor. Like all flower honeys, cotton honey has a tendency to crystallize fairly rapidly. Tree honeys generally granulate more slowly. Some of the sugars that comprise honey are stable as a crystal, not as a liquid. Of course, the granulation of honey does not affect its quality or taste; and the honey may be easily re-liquefied by gently warming. Hot, buttered biscuits call out for cotton honey.
--Richard
Posted by Richard Underhill at 9:27 PM