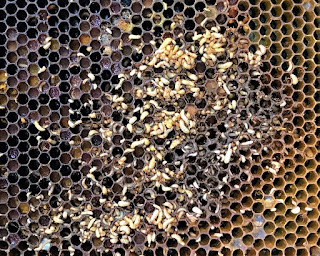 The worker bees in a strong colony protect the fragile beeswax combs that hold honey, pollen, bee bread, and brood required to sustain the colony. However, whenever a colony is weakened, either by becoming queenless or through disease, hive scavengers rapidly move in and destroy the combs. The principal hive scavengers are wax moths and small hive beetles, and it is the larval stage of both of these insects that destroys the combs of unprotected hives. Wax moths have been a part of American beekeeping since the bees were brought to the New World in colonial times. However, the small hive beetle is a much more recently introduced invasive pest, having arrived from Africa in 1998. It spread across the country in just four years.

Strong honey bee colonies have plenty of workers to drive adult beetles to the far edges of the hive where the bees build “jails” of propolis to trap and hold beetles. If a hive loses its queen or is stressed by disease or environmental damages, the opportunistic beetles rapidly expand their reproduction, and small hive beetle populations explode exponentially. Beetle reproduction is especially rapid in hot weather. Today’s photo shows beetle larvae in a hive that lost its queen in a late summer supersedure attempt. The voracious larvae are attracted to the protein of stored pollen. As beetle larvae devour the hive’s pollen, honey, brood, and beeswax combs, they leave behind a “slime” of their waste. Yeast grows on the slime which has the odor of fermenting oranges. The odor repels honey bees and attracts small hive beetles from great distances. The beetles’ highly sensitive antennae detect honey bee alarm pheromone from distressed colonies small hive beetle slime odor. It often takes the bees a full year to build their combs, and they can be destroyed quickly by small hive beetle larvae. Scavenging beetle larvae destroy natural beeswax hive foundation, but plastic foundation can be reused after washing away the slime with water.