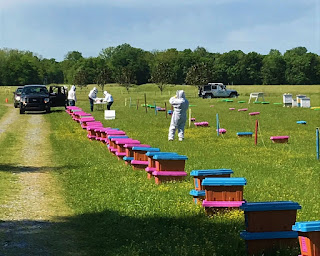 How can you get a colony of bees for your new bee hive? You may purchase a complete hive from a beekeeper along with its colony of bees, or you may purchase a nucleus hive, or nuc, which is a small colony taken from a full-size hive. A nuc is a bee colony in equilibrium; it contains an egg-laying queen, brood of all stages, and workers of all ages. A nuc may be a split, or colony division. A split is made by dividing a hive, moving frames of bees to a new hive and introducing a new queen. Alternately, you may purchase a package of bees: bees in a box and not on frames. A package of bees typically contains three pounds of bees, about 12,000 bees, and a mated queen held in a protective cage. The bees in a package are workers gathered from numerous hives, and the queen is reared separately. A package of bees only becomes a colony after a few days when the bees detect and then organize their behavior around the queen’s pheromones.

You can gather bees when colonies swarm. Swarming is a natural occurrence; it is reproduction of bees on a colony-wide basis. European honey bee colonies, like those we have in the U.S., typically swarm once a year. If you are able to capture a swarm, it can be moved into a hive. You can put swarm catcher hives, or bait hives, in trees to attract swarming bees. There are two methods of moving bee colonies that are already established in structures like hollow trees or walls of buildings. You can attempt a trap-out, where you build a funnel to allow bees to exit the structure and not reenter. A cut-out involves physically opening the structure and cutting out the combs containing the bees and brood. I’ve bought or sold bees using each of these methods. Today’s photo: nucleus hives awaiting beekeeper pick-up at Bemis Honey Bee Farm in Little Rock.

Posted by Richard Underhill at 11:56 AM