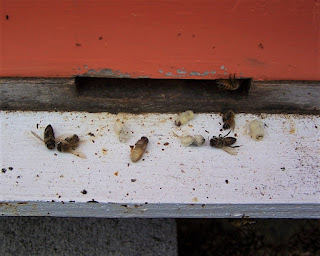 Beekeeping involves observing hives from the outside as much as on the inside. Beekeepers can’t risk opening hives for a thorough examination during cold weather, but we should occasionally visit the hives during cold and inclement weather. Much can be told of the condition of the colonies inside the bee hives by observing from the outside. Bees do not venture outside the hives when temperatures are below 50 degrees Fahrenheit. They remain inside, clustered together to retain warmth. Honey bees eat their high-energy food, honey, and generate heat in their flight muscles. Only on warm days, bees venture from their hive to make cleansing flights to eliminate their body waste. You will see forager bees that are collecting water, nectar, and pollen. Observing foragers returning to a hive carrying pollen on their pollen baskets of their hind legs usually indicates that their queen is laying eggs. Finding some dead bees on the ground in front of the hives is normal, as a number of bees die inside the hive every day, and they are removed from the hive. A foul odor at a hive may indicate a dead colony with a large number of bees decaying on the hive’s bottom board. If the air temperature is close to 50 degrees, the beekeeper may briefly open a hive’s cover to see if the bees are alive. If the colony has died, the beekeeper needs to protect the combs so that they will not be destroyed by hive scavengers.

On my hive visit today, I observed bee pupae on the landing board at the entrance to one hive as seen here. Likely, the workers are aborting brood infested with parasitic Varroa mites. A genetic trait, called hygienic behavior, allows workers to detect Varroa developing with the bee pupae and abort the bee and mites. When the weather warms enough for me to open the hives, I will measure the mite loads and apply an appropriate treatment if the mites exceed prescribed thresholds.

--Richard
Posted by Richard Underhill at 10:19 AM