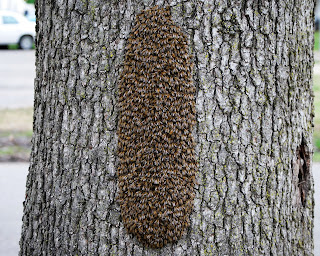 Beekeepers receive many calls from people who find bees in trees. Particularly in the spring, these are swarms of honey bees hanging from a limb. It is also common for homeowners to find honey bees living in a hollow cavity in a tree in their yard. The tree may have been occupied by bees for a long period of time, but the bees are unnoticed until warm weather brings about increased flight activity. When one receives a swarm call, it is best to quiz the caller for as many details as possible. I received a message that there were bees on a tree limb exactly seven and one-half feet above the ground. This would be a perfect opportunity to try out my new swarm collecting device that I built from a design shown on John Jones’ Stone Mountain, Georgia beekeeping blog at http://stonemountaingeorgiabeediary.blogspot.com/2011/05/swarm-catcher-5-gallow-water-bottle-in.html. The device is a plastic jug mounted on an extension pole for safe removal of bees in a tree while standing on the ground.


I loaded my truck with a swarm box, bee hive, feeder, syrup, a bee suit, veil, and tools. Next, I called to get exact directions and clarify details from the homeowner. He finally described the bees as being one cupful of bees, a rather small swarm, possibly from the colony that he had an exterminator spray inside the tree. He read out a list of three insecticides that had been sprayed or dusted on the bees plus an adhesive sealant sprayed into their nest. He asked me if I reckoned that spraying had hurt the bees, and did I want them. I told him that I had no use for dead bees. Remarkably, this was not my only call to collect dead bees. The other recent caller wanted me to pick-up dead, insecticide-sprayed bees so that they would not come back to life and harm her. Today’s photo is a swarm of live bees I collected from the surface of an oak tree.
--Richard
Posted by Richard Underhill at 9:28 PM