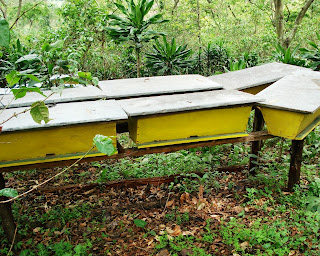 A reader asked a question about the mechanism in which honey bees pass their genes along to the next generation. Honey bees employ a reproductive scheme called “haplodiplodity.” For an informed answer, I called upon my friend, Jon Zawislak, apiary instructor with the University of Arkansas Cooperative Extension Service. I quote him below. It appears to me that an evolutionary advantage of haplodiploidity may be in altruistic behavior in which individual bees act for the protection of the colony over self. From Jon Zawislak:
“Begin with the strict Darwinian principle that an organism is considered to be most "successful" by passing on as many copies of its genes as it can.

Worker honey bees get half of their DNA from their mother. Of that 50%, about 25% is identical (basic Mendelian genetics). The same is true for humans, you get 50% of your DNA from your mother, of which you share about 25% identical maternal DNA with each of your siblings (although not the same 25% with each). The lopsided relationship among honey bees comes from the paternal side, from the drones. Drones have only one set of chromosomes, so their sperm does not undergo reduction division to halve the number of genes, which effectively mixes them up first. Each of the millions of sperm that a drone produces is identical, and contains his entire set of DNA. So when worker bees are "super sisters" they share 75% identical DNA: 25% from the queen and 50% from the drone (all he has, so all incidental). Workers who have different fathers share only maternal DNA, and are said to be 25% related. If this particular queen mated with 20 drones, on average each will be the father of only 5% of the workers in the hive, and each worker will share this super-sister relationship with only 5% of her family.

If a worker helps one of her super-sisters to become the next queen, she ensures that she is 37.5% related to every new bee in the colony (50% of 75%). Even if one of her half-sisters becomes the next queen, she will still be 12.5% related to all of them. But this is still better odds than if she has her own sons. If a worker becomes a laying worker, then she can produce only drones, which are 50% related to her. If one of her drone sons successfully mates, she will be 50% related to her granddaughters as well (because the drone passes on all of its DNA). But, each drone has a fairly slim chance of mating at all (a conservative estimate might say one in 1000 chance of finding a virgin queen). And if he does, he will only be one of perhaps 20 drones to do so. Therefore if a worker becomes a layer, she has less than one in 1000 chance of her son passing on 50% of her genes to just 5% of another colony.

A worker is more closely related to her super-sisters than she is to either of her parents or her own potential offspring. And even though she's only this close to as few as 5% of a colony, consider how many bees that is. In a colony of 40,000 bees, that's still 2000 super-sisters. Close kinship also promotes altruistic behaviors, where an individual promotes the well-being of close relatives, even at a potential risk to themselves. Bees demonstrate several examples... spring bees work themselves to death so that wintering bees will have food to eat during the cold months; individual bees sting and die to defend and protect the rest of the colony; and workers "give up" their own reproduction to help raise their sisters and nieces. But as we have seen, the family unit is more successful at passing on some of its genes if they all work to help their queen. Solitary bees that go it alone produce only a handful of offspring each year, rather than the thousands that a honey bee queen can produce.

Of course this idea of kinship and altruism assumes that bees know that they are closely related. Studies have shown that workers reared in isolation can distinguish between full- and half-sisters (Getz & Smith. 1986. Animal Behav. 34:1617-1626). Workers preferentially rear queens from more closely related larvae (Visscher. 1985. Behav. Ecol. Sociobiol. 18:453-460). Workers are most willing to groom and feed closely related sisters (Frumhoff & Schneider (1987) Animal Behav. 35:255-262). And workers may cannibalize eggs less closely related to themselves (Ratnieks & Visscher (1989) Nature 342:796-797).”