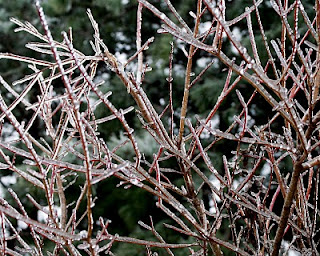 The weather affects the many plants that the honey bees rely upon for nectar and pollen. One of the determining conditions for nectar and pollen production later in the year is winter storms. The Mid-South lies in the part of the country that neither receives great amounts of winter precipitation nor a complete lack of it. One hundred miles further north, you would see regular snows; one hundred miles south, you would rarely ever see snow. This middle region often receives a mixture of rain, sleet, and snow. The air temperature at the time of the winter storms determines how the precipitation affects the trees and plants. This week a slow-moving storm dropped a heavy covering of sleet, leaving the ground covered with several inches of hard ice. Trees like the native dogwood in the picture received a light coating of ice. Had the temperature been only slightly warmer, freezing rain would have covered the tree limbs with a much heavier coating of ice, causing considerable damage to the trees.

While major ice storms, which break limbs and topple entire trees, bring much attention for electrical power losses and safety hazards, they also affect the honey bees later in the year. Ice storms often damage the flower buds or the branches that produce flowers foraged by the bees. Last year’s severe ice storms in the Mid-South virtually eliminated the nectar from black locust and tuliptree that many beekeepers rely upon for honey production. While the failure of certain sources of nectar and pollen may disrupt the regular flow of bee foods, the scout bees can usually find alternative sources. This change in nectars leads to differences in the color and flavor of honeys from the same bee yard from year to year. I observed a thin coating of ice on dogwoods, willows, plums, maples and redbuds that the honey bees will be visiting in the coming months. The ice damage was slight.
--Richard
Posted by Richard Underhill at 8:23 PM