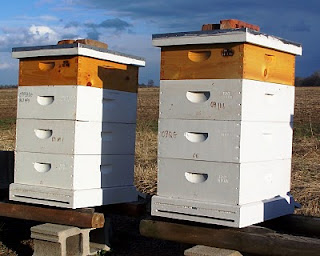 Beekeepers frequently get invited to make public presentations about honey bees and beekeeping. Citizens are quite often interested and inquisitive about the life of the honey bee. Many are fascinated as a result of some well-produced documentary programs that aired following the advent of the Colony Collapse Disorder. A number of people have heard of the importance of the honey bee through its role in producing human and animal foods by pollinating flowering plants. They want to know just how much of an effect the loss of pollinators could have on us.

I spoke to a group of community leaders at a civic club luncheon. They were interested in the fact that the honey bee is the only insect in the temperate zone that remains alive and active throughout the year. I explained to them that with the weather quite cold now, the bees are huddled together in a cluster, using their own bodies to generate and hold heat. They accomplish this by eating the honey that they produced throughout the previous year. The high-energy food allows them to survive the lengthy period until flowering plants once again come into bloom. The honey that they produce is a unique item, the only food that can last virtually forever without refrigeration or treatment. We talked about the decline in honey bee and native pollinator populations that have occurred in recent years. I explained that the audience could help restore bees by creating a pollinator garden in their own home yards. I suggested that they could help by limiting the use of chemical herbicides and pesticides used on the lawn, golf courses, and farms. I asked them to use their influence to ask that their golf courses adopt turf maintenance practices that don’t harm the pollinators. Golf courses typically employ 14 times the amount of chemicals as agricultural crop fields. Today’s picture shows two Peace Bee Farm hives set-up for the winter with the hives tilted forward and top feeders in place.
--Richard
Posted by Richard Underhill at 1:09 PM