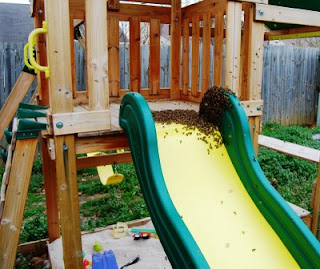 Honey bees expand their range and increase the number of colonies by dividing their colony in two. This process of propagating bees on a colony-wide basis is called swarming. Typically, honey bees swarm once a year. This usually occurs in the spring, however some swarming continues through the summer and fall.

The process of swarming begins with the growth of the colony early in the spring. Often the bees will outgrow the size of the cavity the colony is occupying. The bees will begin swarm preparations by creating a new queen, as every colony must have a queen. Once there is a new queen in the colony, or one is nearing the point of emerging as an adult, the colony will divide itself. Usually half of the bees or more will fly away, accompanied by the old queen. In a swirling cloud of thousands of bees, the swarm drifts around until it gathers on a nearby resting place where it stays until it moves along to a cavity for a permanent nest. Here, a swarm of bees found children’s playground equipment as a convenient resting area. In many such cases, swarms become interesting but unwanted visitors.
--Richard
Posted by Richard Underhill at 9:34 PM