Honey Bees Build Up for Spring 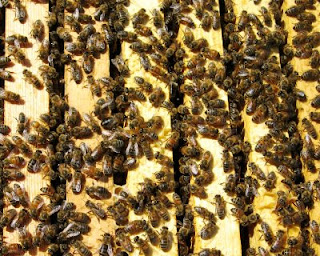 As we approach the beginning of spring, the honey bees are rapidly expanding their colonies. While the bees huddled together in a small cluster over the winter with very little egg laying, they are now expanding their colony. The strong queen is now laying fifteen hundred or more eggs per day. When we open the hive the bees not only cover the frames, but they also spill over onto the tops of the frames. The majority of the bees that we see here are workers, but drones are starting to be seen in the hive as well. One large, dark-colored drone can be seen just to the left of the center of the picture.

The honey bees’ natural tendency is to expand the colony’s population at this time and then split the colony into two. This colony-wide propagation is called swarming. It is the way that the bees seek out new nesting areas and expand their range. With the approach of spring, the large bee population is a welcomed sight for the beekeeper. It takes a large population of bees to take advantage of the spring flowers soon to burst into bloom.
--Richard
Posted by Richard Underhill at 9:45 PM