Drones Appear on the Combs 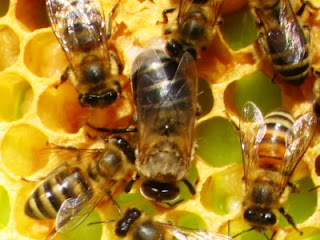 As spring nears, the bees are continuing their preparations for the change of seasons. While inspecting hives this week, we find drone honey bees moving about the combs. The drones are the only male honey bees. Having a boxy appearance, they are larger than the workers. Their eyes, which seem to meet in the center, are considerably larger than those of the workers. The drones have no sting. While a honey bee colony will annually produce many thousands of workers, it will only produce several hundred drones.

The way we understand drones, their sole purpose in the honey bee colony is to mate with queen bees in flight. The drones thus accomplish a necessary role in reproduction of bees within the hive as well as propagation of colonies through swarming. Drones are found in the hive from spring through fall. Typically, they leave the hive each afternoon seeking a queen in an area of the sky known as a drone concentration area. With the presence of drones in the hives, it won’t be too long before beekeepers set up queen-mating nucleus hives to accommodate new queen bees. The presence of drones in the hive is a true sign of spring approaching.
--Richard
Posted by Richard Underhill at 10:58 PM