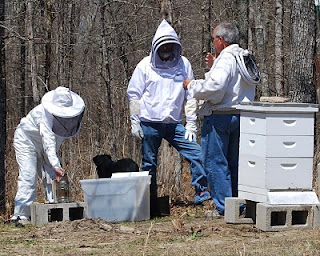 When the calendar turns to April, conditions change rapidly in the bee hive. Scout bees are finding a variety of sources of nectar and pollen, and foraging activity picks up considerably. Warmer weather allows beekeepers the opportunity to check on the bees and count winter losses. A number of colonies can be expected to not survive through February and March when starvation frequently occurs. In the early spring, hive inspections reveal the potential for expanding the honey bee colony and planning corrective actions to be taken if the colony is not strong and healthy. In the photo, Shirley Murphy lights her smoker while Mike Worthy and I prepare to look inside the hive. Shirley is participating in the Tennessee Beekeepers Association’s program that pairs new beekeepers with experienced mentors. Shirley’s colony of bees survived the winter, but the hive may need some attention. While the hive was full of bees, the brood was not as we expected. There was an abundance of drone cells throughout the hive and a number of drones walking about the frames. We could not find any worker brood, however. It appeared that the queen had run out of sperm and was only producing infertile eggs that become drones. Such a condition leaves the colony hopelessly doomed to dwindle away, as it results in no work force of foragers to gather food. I suggested that Shirley should purchase a new queen. She is adding new hives this spring as well. Having extra hives will give her the means of correcting many hive problems. She will be able to borrow brood and bees from one hive to add to another.
The Apiary Inspectors of America, the USDA, and Penn State University are conducting a survey of beekeepers in the United States, Canada, the Caribbean, and Europe to measure the over-winter losses. Beekeepers can participate by logging onto http://www.surveymonkey.com/s/beeloss0910. Widespread participation will help them determine the size of the losses and their locations.
--Richard
Posted by Richard Underhill at 11:00 PM