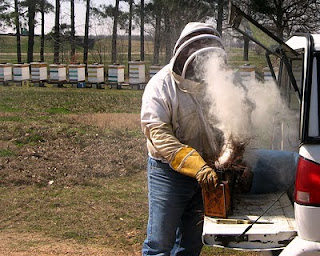 The parasitic Varroa mite, detected in the United States in 1987, is the number one killer of honey bees. Parasitic mites devastated the honey bee population, greatly reducing the number of managed hives and killing most of the feral colonies. Varroa mites enter honey bee brood cells at the larva stage before the cells are capped with beeswax. As the bees continue their development as pupae, the Varroa reproduce and the mites suck the nutrients from the pupae. The mites remain on the adult bees after they emerge from the cells and continue to suck nutrients from the bees. While this parasitism kills bees and weakens the colony, the greater effect may result from viral diseases that the Varroa help spread. When the mites puncture the exoskeleton of the honey bee, they introduce more than a dozen identified viruses, some quite deadly. One recently identified, Israeli Acute Paralysis Virus, is being found regularly in colonies being lost to Colony Collapse Disorder. Beekeepers often find bees with missing or curly wings suffering from Varroa-vectored Deformed Wing Virus. These bees, which usually live for one day, are an indicator of heavy Varroa mite loads in the colony.

While parasitic mites present a true health problem for the beekeeper, choosing a method of treating the mites is quite challenging. In less than two decades of aggressive treatment with “harsh” chemical miticides, the Varroa became largely resistant to the chemicals. Left untreated, honey bee colonies often weaken and die in a year or two. Breeding in genetically-passed behaviors is proving successful. Honey bees that can detect Varroa reproducing and growing inside capped brood cells remove the bee pupae along with the mites. Using a series of integrated pest management practices may reduce the number of Varroa in the colony. The use of “softer” mite treatments is proving promising. Viruses remain a strong suspect in the deadly mix of factors leading to Colony Collapse Disorder. Beekeepers need to periodically check colonies and measure Varroa levels.
--Richard
Posted by Richard Underhill at 7:42 PM