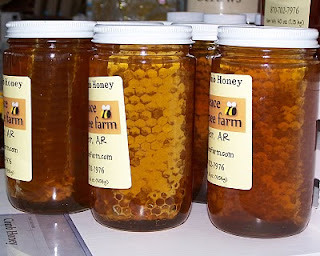 Honey eaten with the comb is a fond memory for many people who remember that this is the way that they enjoyed honey in their childhood. In earlier times there existed a tradition of honey hunting, particularly in rural areas. For many, honey was eaten with the comb after the honey was collected by robbing a bee tree. Throughout the year people would observe the flight of foraging honey bees returning to their natural nests in hollow trees in the forest. Teams of adventurous individuals would return to rob the bee tree, often in the winter when the colony’s population was small and the bees were not flying about. Robbing usually involved killing the colony by the burning of sulfur or by smoking heavily. Once the bees were killed, the tree would be felled and cut open. All of the honeycomb would be removed. If the honey hunters were experienced and employed a gentler hand, they could cut an opening into the tree and remove some of the comb by hand without killing the colony. In either case, the honey would be divided among the honey hunters. I often hear customers at farmers markets relating stories from their childhood of parents bringing in honey collected in the comb.

Honey in the jar with the comb is usually called chunk honey. It is produced in specially prepared frames using thin surplus foundation of pure beeswax. During a strong nectar flow, the bees will draw out the cells from the foundation and fill them with honey. The beekeeper needs to watch the progress of the bees’ work and remove the frames as soon as they are completely filled with honey and capped with beeswax. The comb is cut from the frame with a sharp knife and placed in a wide-mouth honey jar. A light colored extracted honey is poured over the comb to fill the jar. Chunk honey like that in the photo is a most popular item at market.
--Richard
Posted by Richard Underhill at 9:05 PM